Unfortunately The morning had brought bad news for Lise, She was rudely awoken by Her console, and a mail from the militia...
Having Known the call to arms would eventually arise, Lise reluctantly put her Stalking on hold and responded to the call, docking her Astero in the station after collecting her assets from space, she was not certain when she would be able to return, or if she would at all.
Lise, now Not being the most liked pilot in New Eden, had to take caution traveling back to the Caldari militia, she Had previously contacted Korgyll and asked for an interceptor frigate to be built and dropped of in her stalking area, it was to be fitted with no offence, strictly for high security travel. Lise had few trusted people she dealt with when it came to personal business.
Korgyll Could travel between stations in a shuttle or frigate to attend to ships, at most he could fly a frigate in the regions policed by Concord, flying a high class frigate such as an interceptor, and into dangerous space needed more training.
The hauler, was a quiet and generally unknown matari slave that had found fortune through his eggers error, but that is another story. The hauler, as he so liked to be known, now stayed under the radar and made a comfortable living carrying goods for a select few. The hauler, seemed to exist only within freighters, blockade runners, and other hauling industrials, with a crew so small it was a wonder how he hauled anything, but he did and he did it well. 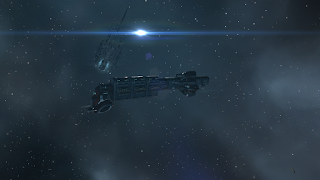 Lise had a feeling she was going to have to be more careful in high security systems and had ordered a Stiletto for such journeys. Lise was all too familiar with a minmatar interceptor, and she loved them, purely for there speed, so when she had to get one for just that purpose, she was almost looking forward to the mediocre long journeys she would have to make between her home and the militia. Lise set her course, Requested the undock, assisted by another drone she undocked her stiletto and headed for Caldari space, twenty jumps to the deployment station. “piece of cake”.
Lise set her destination and engaged warp, the interceptor aligned at an alarming rate and was already at warp speed, shoving lise back in her pod and making her gasp,  frakin blood ships!!....this shouldn’t take to long. The Interceptor had been fitted by Korgyll, Inertia modifications and nozzle thrusters where the only thing that had been fitted, no offence, as Lise had requested.
And the Journey did not take to long, Lise felt like an outlaw, putting locals and Concord on there toes as she warped through high security space with faction police close behind in persuit. A criminal, and it brought a sense of achievement. Lise no longer cared for the protection of the empire.

Arrival at the militia saw chaos and panic as lise docked in the station. Before she could even eject her pod from the interceptor she could see people waiting in her dock bay. Glatious, the militia’s head of operations, his assistant Kaprika, and two Fleet Commanders of Lise’s branch stood in a huddle by lise’s scaffold.  “good break?” Glatious asked as lise clambered down from her capsule, “epic... Sir” Glatious lifted one side of his mouth with a sort of smile, and continued “ Good, and refreshed I hope, Lise, We have recognised your recent efforts, I have informed the militia and your commanders and I am now appointing you one of my directors, I will need your skills and assistance in the near future, there is little time to talk on the matter now.”.
Near future plans? “oh... well, thank you... Sir” Lise was a a little shocked, she was not expecting the promotion and she wondered what “plans” where in the pipeline.
Glatious nodded, “on that note I shall leave you. I’m sure the FC’s will bring you up to speed on our current objective. We leave at eighteen hundred”. Without hesitation Glatious spun and marched out of the quarters, closely followed by Kaprika, Leaving Lise and two fleet commanders. Lise rolled her shoulders, and brushed her self off, attempting to look a little more important, She Nodded at one of the FC’s “So come on, inform me”
The FC stood up straight as if he had been called to attention in a squad. “ We have a friendly custom office coming out of reinforce, ma’am!!. We are needed as back up for Hecon, May I suggest Tornado’s, ma’am!!?”
Lise paused a second, She had never been involved in the decision making before.
Erm a customs office?... Nado’s sound good... Keep at range, anything too much we’ll get the frack out! Lise returned her attention to the FC. “sounds good commander, get too it”
The two fleet commanders gave a salut, spun and marched out of Lise’s dock.
Lise Wandered to find Korgyll, He would need to do a quick check of Lise’s Tonado before she had to undock for the fleet. And she, would need to prepare... To be continued.
Posted by lise moon at 04:57